By Michael Cervin
Special to the Business Times
June 18, 2007

It may come as a surprise to learn the Channel Islands are considered one of the best places in the world to harvest fresh sea urchins, commonly known as uni at the sushi bar.

The meat inside the urchin, called roe, is a delicacy in Japan. Sixty percent of uni harvested in the United States is exported to overseas markets. 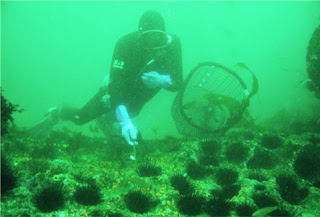 Most California uni is consumed in sushi bars locally at Japanese restaurants such as Piranha in Santa Barbara, I Love Sushi in Ventura and Yanagi Sushi in Pismo Beach, as well as across the nation.

Amanda Cover, the manager at Piranha, said the restaurant have been serving uni for 25 years. “I’ve traveled all over the U.S. and you see Santa Barbara uni everywhere,” she said.

Although she believes there’s a learning curve to educate new customers about sea urchin, she sees more people willing to try something new.

“The only uni we serve is from right down the street at the docks.” For Piranha, like most sushi houses, fresh is best. Even traditional restaurants are incorporating uni into their menus.

Brian Colgate, owner of the Santa Barbara Fish Co. on the docks in Santa Barbara, sells uni in 80- and 300-gram trays and gives out samples.

Although he supplies many Tri-Counties sushi houses, his Web site has given him broad marketing appeal and has allowed him to ship across the United States and overseas.

“We only carry Grade A roe,” he said, and for that, an 80-gram tray, about seven strips of roe, sells for $14.99. There are as many as eight different grades, with the best roe possessing a bright orange or yellow color.

Santa Barbara Fish Co. has contracts with commercial fisherman and sells direct to the public from its small store at the harbor. The company sells live urchins as well for those who are more adventurous.

Santa Barbara and Ventura were not always the two best off-loading ports, however. For a long time, Northern California harvested uni, and they still do, though in less impressive numbers. The unpredictable weather made it less economically feasible to harvest urchins in the Monterey Bay.

Since sea urchins feed primarily on kelp, excessive cold water doesn’t always provide the nutrients that warmer waters do. Therefore, the roe is less commercially viable. With the confluence of warm and cold waters off the Channel Islands, the area has become an ideal location to dive and harvest sea urchin.

The California sea urchin industry survives because more than 300 divers, operating from 180 vessels, are harvesting at depths typically 20 to 60 feet, according to the Fish and Game Commission.

The most common types of harvested sea urchin are red, followed by purple and green.

A decade ago 90 percent of the fresh roe harvested in California, Oregon and Washington was sent overseas, but when prices plummeted in Asian markets, the sea urchin industry took a beating financially.

“When the Japanese economy declined in the 1990s, fisherman began to focus on domestic markets,” said Vern Goehring, executive director of the California Sea Urchin Commission, based in Sacramento. “We see a 60/40 split, with the majority of uni being exported,” Goehring said. “The highest value is in the domestic market, but the greater volume is shipped overseas.”

According to 2005 estimates, exports of uni to Japan totaled $28 million in sales, followed by Hong Kong and Taiwan, with $5.3 million and $1 million, respectively.
Posted by Brian Isaeff at 6:56 AM

Nice article - thanks for spreading the word about Santa Barbara sea urchins.

Like oysters, uni is an acquired taste. I love Santa Barbara urchin-it's the best!

Like oysters, uni is an acquired taste.
I love Santa Barbara sea urchins!

Enjoy daily news or view the "label" catagories below to view specific topics. 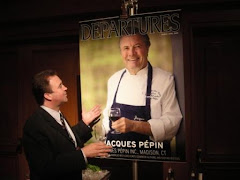 Brian Isaeff, Territory Manager with US Foodservice San Francisco has been over-servicing accounts on the Monterey Peninsula since October 1997. 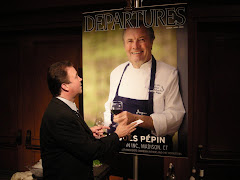